cran·ber·ry
1. A mat-forming, evergreen shrub (Vaccinium macrocarpum) of eastern North America, having pink flowers and tart, red, edible berries.
2. The berries of this plant, used in sauces, jellies, relishes, and beverages.
cot·tage
1. A small, single-storied house, especially in the country.
2. A small vacation house.
cran·ber·ry cot·tage
1. A tiny house in the woods in the north of Holland.
2. Peace, quiet, paradise.

I have been playing around with things in my home. Moving one thing here and another there is fun and can give you a new feel in your home. I have moved my butler tray from my hall into my living room. I create a seasonal vignette on this table. Right now, I have a stitched piece that I made which looks like Dutch tiles sitting on an easel. I thought that Teddy looked just right with it since he is the same color as the gold in the stitching. My olive pot has a seasonal display of flowers. 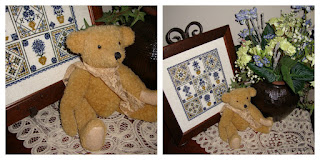 But there was a good reason for making this change. I do not like this small wall as you just come into the living room. I wanted to do something to hide two eyesores. First, the plugs are now not as visible. I have a wooden dough bowl at the bottom of the butler tray. It too changes with the seasons but I keep a small set of white lights in it which looks pretty in the evenings. 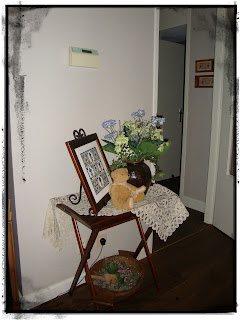 Second is our heating thermostat. It is a large computer controlled plastic box which has yellowed with age. I have two hooks I am going to hang on each side to hang a quilt and disguise the thermostat. I have to have Jos help out as I need the hooks I have mounted on a piece of wood to bring them far enough from the wall so a quilt hangs in front of this ugly but needed control in house. Once this is done, I will not be so bothered by this wall. 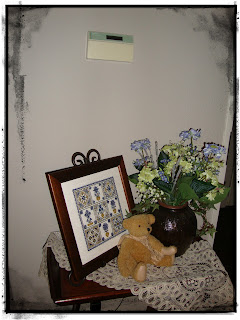 In the language of flowers, the thistle is the symbol of nobility or austerity.
aus·ter·i·ty/ôˈsteritē/
Noun: 1. Sternness or severity of manner or attitude.
2. Extreme plainness and simplicity of style or appearance.


Oh how I do love the second meaning of austerity... 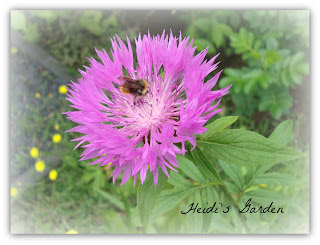 I have always loved thistles. When we planted up our new garden last year, I wanted to have some cultivated forms of this beauty. I would love some from nature itself as I really love the look of the beautiful purple flower among the thorny stems. I am however thrilled with the first of my two types of thistles blooming happily in my garden. Even the little honeybees are happy as they drink the nectar. 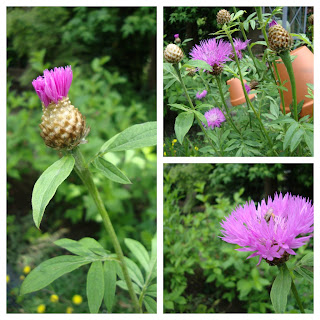 "Do not blame the thistle that you see no beauty."
~ Jonathan Lockwood Huie

Email ThisBlogThis!Share to TwitterShare to FacebookShare to Pinterest
Labels: garden, language of flowers

Edith Holden was a teacher, naturalist and artist during the Edwardian era. I discovered her book The Country Diary of an Edwardian Lady when I was just a teenager in a bookshop. It was love at first sight. I admired her style immediately.

This is the Edith Holden rose. It was a rose that I had to search for finding out that the only person to grow them here in Holland happened to be located right beside the house of a good friend's mother living in the south of Holland. She told me she would have her mother go get the rose bush for me. It took time as the man said he did not have any when she first inquired. I was thrilled when it finally arrived at my garden gate. It moved to our new home's garden here in the city when we moved. I could never part with this rose bush. 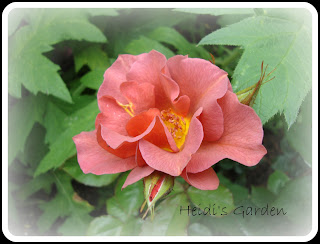 This year, we had a very severe frost late in the winter which damaged some of our plants. I lost a few of my rose bushes and my climbing roses. I feared that my Edith Holden rose was dead too but pruned it hard and prayed it would recover.
It did recover as you see and is just starting to bloom in the last week. What a joy for me to see this special rose and its beautiful salmon brown color. 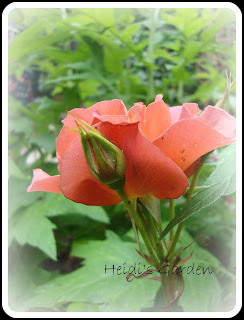 Like her artwork, the Edith Holden rose is something that always brings joy.

My Food and Book Blog